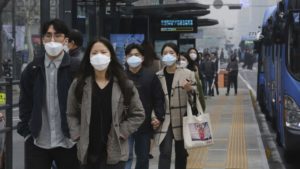 The damage caused by pollution on the reproductive, nervous and respiratory systems can run for several generations. According to a new study, this would also apply to the immune system.

If a famous saying is “you are what you eat”, as far as the body’s ability to fight infections is concerned, this study suggests that to some extent, you may also be what your great-grandmother was eating, according to Professor of Immunology and Toxicology Paige Lawrence. In a press release published she presented the research she has led, the conclusion of which is that the effects of environmental pollution on several generations also affect the immune system.

It is agreed that pollution can have disastrous health consequences. For example, according to WHO figures, 1.3 million people die each year from urban air pollution. A study had also highlighted the risks of polluted air inhaled by a pregnant woman, which can have harmful long-term effects on the health of the child or cause premature births.

Pollution of industries on the environment could impact, according to this study, the immune systems of several successive generations.

A Genetic Alteration That is Transmitted

If past research already shows that the reproductive, nervous and respiratory systems can be severely affected over several generations by pollutants, this new study points to an additional direct effect on the immune system, and here too in a transgenerational way. These conclusions come from an experiment on mice, whose immune mechanism has many similarities with humans.

Scientists exposed pregnant mice to a toxic chemical widely used in the industry, namely dioxin. It is found for example in the production of pesticides, and even in waste incineration processes. Dioxins are highly toxic chemical compounds harmful to health and should be handled with caution. They are considered hazardous materials and only special companies in waste management or medical research can deal with them.

It can sometimes be found in food and thus integrate the human body through the digestive tract. The result of the experiment is that white blood cells intended to protect the organism against foreign pathogens have been shown to be particularly weakened in the face of a virus such as influenza A.

This alteration in the expression of each gene is transmitted from generation to generation.

More importantly, if the pregnant mouse was affected by this weakened immune response, its offspring as well, but also the generations that followed … up to the equivalent of great grandchildren. And this transmission effect is even more present in the female. The explanation comes according to the researchers’ hypothesis from an impact on genes: dioxin clings to a protein called AHR and then alters the transcription of genetic instructions. This alteration in the expression of each gene is transmitted from generation to generation.

This research is the first to concretely make such observations. Before considering the conclusions as recorded, new data are still necessary. If confirmed, it would also provide a broader understanding of the human immune system.

The results obtained would indeed explain why, in the event of an influenza epidemic, for example, vaccines do not have the same effectiveness on each person. Environmental pollution could be a factor in immune deficiency from birth (then combined with other factors such as age and mutations in the virus).