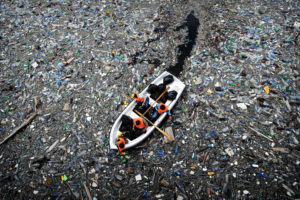 If the sorting of our waste materials remains unusual to most poeple, let us not be blinded by the mirage of all-recycling, which alone can not solve the big problem of post-use management of plastic waste.

By billions, debris are concentrated in the seas at the mercy of the currents, forming a polluting plastisphere highly integrated into the ecosystem. Eliminating it is a headache for specialists.

In 2015, 9.1 million tonnes of plastic ended up in the sea, drained by rains and winds, carried by rivers. Depending on their density, some flow, others float and are driven by winds and ocean currents. Today the amount of plastic in the oceans is estimated at 300 million tons, and if nothing is done, there will be an additional 155 million tons by 2025.

A priori, this plastiplankton is not dangerous for the organisms that ingest it. Their digestive system evacuates the constituents of plastic, which are inert, unassimilable materials.

However, a study published in the journal Environmental Toxicology and Chemistry showed that molds in the presence of polystyrene nanobeads lacked appetite. The impact is not zero therefore, on filtering organisms.

It is even less so when it is due to micro or macro-waste. First because they serve as vehicles for the dissemination of species in the oceans. For example, the 2011 tsunami which released billions of tonnes of waste to the sea, resulted in the migration of some 120 species from Japan to Canada. And with them, a lot of pathogens for local people.

The plastisphere changes the rules of the game between different organisms. So are the Halobates sericeus, marine insects that walk on water and lay on floating objects … a fortiori on plastic debris. In an environment where resources are scarce, the multiplication of nesting sites favors their development, to the detriment of other species. And especially fish, which also deposit on plastics their eggs, a dish of choice for halobates.

Three years ago, a study by researchers at the University of California found that these insects proliferated in the North Pacific Gyre. In 2015, the 7th Continent mission also took large quantities of them in the North Atlantic.

Other privileged inhabitants of the seventh continent are the jellyfish whose young polyps (first stage of development) colonize the pieces of plastic willingly. Perhaps this is the key to their proliferation? What is certain is that jellyfish eat fish. So the more jellyfish there are, the fewer fish there will be.

Finally, waste that contains polyethylene become porous by degrading and absorb persistent pollutants. They are thus transformed into true “sponges” with heavy metals in them. What happens to these pollutants? Are they released into the environment? Are they transferred to seaweed or plankton? The study of the plastisphere is just beginning. And faced with the extent of the disaster, it is urgent to understand before considering cleaning the seas. Because under the plastics, there is life, a life abounding to be preserved.

The solutions to get rid of plastic

Among the possible actions, some fall under the false good idea, but others would have a real effectiveness. According to a study published in Science in 2015, the 192 coastal countries of the planet produced 275 million tonnes of plastic waste in 2010, of which 8 million tonnes were dumped into the oceans. Faced with this finding, what to do?

Reduce pollution at the source?

Ban all plastics? The solution is unrealistic. Without food film, for example, a large amount of food would be thrown away. However, restrictive measures are taken. In France, cash bags will be banned in 2016: a bag that serves 20 minutes pollutes indeed 450 years.

Making plastic biodegradable? Biodegradable plastics are designed to disintegrate under specific conditions of humidity, heat and microbiology rarely reached in nature. There is a so-called oxofragmentable plastic: an additive allows its fragmentation. False idea because it makes the pollution invisible. Compostable packaging is. they come from natural products: potatoes, seaweed, corn, agro-food waste. This is the option chosen by the Brittany Materials Engineering Laboratory which uses local waste associated with marine bacteria to produce local packaging. A virtuous circular economy.

Prevent the arrival at the sea?

This requires the general immobilization at the scale of a watershed, involving the regular cleaning of watercourses. The 7th Continent NGO team conducts clean-up operations every year, the last one taking place in the Seine, where an average of 100 kilograms of waste was removed every 100 meters. In France the water agencies finance capture grids, but it’s still anecdotal at this time. A participatory application will be inaugurated in September to allow to photograph and locate by GPS the contaminated places. This information will be transmitted to the waste collection services.

Pick up the rubbish ?

This is simple and effective in the short term. This solution was tested at the scale of a country, Lebanon, where, in the aftermath of the civil war, the seabed was covered with more than one meter of waste. In August 1997, Operation Big Blue launched the first collection campaign that brought together 40,000 people along the coast. Since then, this cleaning has become annual. The problem is as long as plastics are released in the wild, they will have to be picked up. The cycle is endless, therefore.

This is the challenge of the Dutch Boyan Slat who imagined a flexible barrier of two kilometers long, attached to the seabed, which stops the waste pushed by the currents. These are concentrated in the middle of the device, from where they are extracted from a platform. The Ocean Cleanup Association has announced the implementation of a prototype in 2016 off the coast of Japan. Problem: this system does not take into account the plastisphere and the life associated with it. And does not solve the problem of nanoparticles.

Consider renting a dumpster and fill it with all your unwanted plastic items, so they safely end up in a landfil or even better they get recycled. This way it will not end up in the ocean and you will be helping the environment.